We believe and trust in God, who loves us all.

We believe and trust in Jesus, who showed us what love means.

We believe and trust in the Holy Spirit, who helps us to love in return.

Methodism came officially to Woodstock in 1819, when Thomas Meek registered his house for Wesleyan Meetings. Under the Toleration Act, religious activities that were not part of the established church (the Church of England) had to be registered with the authorities. This house, therefore, was the first "Chapel" in the history of Woodstock and was used until a purpose-built chapel was erected in 1824 on the west side of Oxford Street. At the time, membership was about 19 but most of these people were still attached to the Parish Church. It was never John Wesley's desire to form a separate church. There was no resident minister in Woodstock in these early days, so Local Preachers, as now, took many of the services. By 1851 attendance at morning services was about 60, and at evening services about 130.

Sadly, there was much disagreement throughout the whole Methodist Church in its early years and this led to many splits. The biggest group remained the Wesleyan Methodists but the membership in Woodstock was halved with the coming of the Wesleyan Reformers. Meanwhile, in 1868 the Olivet Chapel was built on the east side of Oxford Street by the United Free Methodist Church, opening for worship on Good Friday of that year. 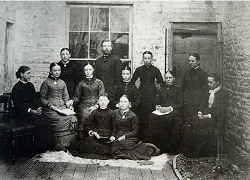 The picture shows Mr Banbury, the Supervisor of the Olivet Chapel, with his helpers (Calcutt, 1999 Wychwood Press). The Chapel cost £978.6.6d, and a debt of £451.5s was carried forward. In 1907 the church became part of the United Methodist Church in union with other small Methodist denominations.

At the turn of the century, the Wesleyan Methodists decided to build a new chapel, the building that is now the current church, and purchased land on the east side of Oxford Street. According to reminiscences there were rows of cottages where the church now stands, with a well behind. The cost of the new chapel was in the order of £1200, with a bank loan of £765 providing much of the cost. This loan was still being paid off in 1919.

The old Wesleyan Chapel was sold and became a cinema and then a garage, Blanco and Young's. It is thought that this was probably the forerunner of the present Young's Garage, now on the site of the old railway station. The old chapel site is now a dress shop. 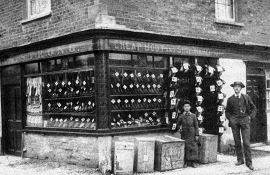 Just after the First World War, a wooden hut was built at the back of the chapel and was used by the Sunday School. This was rented out for use by a school during the week. The hut continued to be used until the present hall was built in the 1980s. From around 1910 Mr Charles Strong was the Organist and Sunday School Teacher. He was a prominent local businessman, and ran the "Cheap Boot and Shoe Warehouse", pictured alongside, (Calcutt, 1999 Wychwood Press). His shop supplied the working people of the town with affordable footwear, particularly boots which were worn by most men as they were employed in manual jobs. Another prominent family was the Henmans, who ran the Henman law firm. Albert Henman, who died in recent times, attended the Sunday School and was tennis player Tim Henman's grandfather. The Henmans were related to Adolphus Ballard, who was the Town Clerk of Woodstock. He and his son are commemorated on a plaque in the church.

In 1932, after much high level discussion, the three main Methodist Churches, The Primitives, The Wesleyan and The United, joined to become the Methodist Church. At this time, it was decided to close the Olivet Chapel and use the present church as the Methodist Church in Woodstock. The Olivet Chapel was sold and became a private house. During the war years, the railings outside the church, mounted on top of the wall, were removed as part of the war effort for iron. It took about sixty years for them to be replaced! It was also during the war that blackouts were placed over the windows. The brackets can still be seen today. 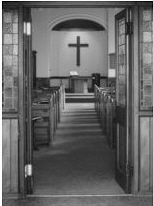 Woodstock continued to be part of the Oxford Circuit and for many years had its own minister, who lived in the manse in New Road. However, when a new manse was built in Kidlington in the 1960s, this manse was sold. In 1989, the wooden hut at the rear of the church was replaced with a new purpose built building.

In the early 1990s, the church itself was redesigned and refurbished with the organ, which was in desperate need of renovation, being replaced by a new electronic one. In 2003, the frontage of the church was cleaned and repaired, following the discovery of erosion of the stonework, and easier access provided for wheelchair users. Since then, we have had sliding glass doors installed to allow people in the street to see what is going on inside, a new audio-visual system and have replaced the majority of our pews with chairs to enable a more flexible use of the space. 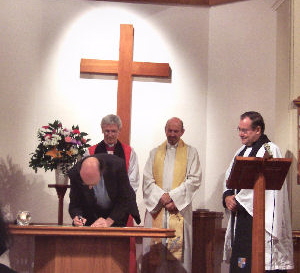 In November 2006 we celebrated 100 years of worship in our current building. In preparation for this, previous ministers were invited back to lead worship in the preceeding months and, on the weekend itself, friends from around the Oxford Circuit joined us for a special celebratory concert on the Saturday afternoon. Worship on the Sunday was led by our own minister, Revd Jonathan Todd, and focussed on the way we are both Story Keepers and Story Tellers, passing on the stories of Jesus and our own stories of the way God's love has touched our lives. The service culminated with a mass release of balloons as we cast our hopes and dreams for the future on to the winds of God's Spirit.

This article is based on Mike Trinder's booklet on the history of the church, prepared for the church's centenary in November 2006. A full copy of the text can be found here.